i
News from Congresswoman Brenda Lawrence

Granholm was first joined by U.S. Rep. Elissa Slotkin (D-Holly) for a walking tour of an electronic manufacturing facility in Holly. U.S. Rep. Haley Stevens (D-Rochester Hills) then joined the secretary for the next two stops — a roundtable at Oakland University about supply chain development, followed by a vehicle technology walking tour at FEV in Auburn Hills.

Biden had announced a new goal earlier Thursday via executive order to make 50% of all new vehicles electric by 2030, which includes plans to invest $6 billion in electric battery development and manufacturing and build 500,000 new electric vehicle charging stations.

Congresswoman Brenda L. Lawrence represents Michigan’s 14th Congressional District that includes a portion of Detroit, the City of Southfield and 16 other cities located in Oakland and Wayne counties. Living in the 14th District her entire life, she was first elected to the U.S. House of Representatives in November of 2014 and has been re-elected in 2016, 2018, and 2020.

Born and raised in Detroit, Congresswoman Lawrence is a product of Michigan’s public-school system. She is an alumna of Pershing High School and earned her bachelor’s degree in Public Administration from Central Michigan University. Before she began her career in public service, the Congresswoman had a notable career with the U.S. Postal Service.

Congresswoman Lawrence and her husband, McArthur Lawrence, are the proud parents of Michael and Michelle. They also adore one granddaughter, Asya.

Brenda Lulenar Lawrence (born October 18, 1954) is an American Democratic politician serving as a member of the United States House of Representatives. Lawrence served as mayor of Southfield, Michigan, from 2001 to 2015. The Democratic nominee for Oakland County executive in 2008 and for lieutenant governor in 2010, she was elected U.S. Representative for Michigan’s 14th congressional district in 2014. The district covers most of eastern Detroit, including downtown, and stretches west to take in portions of Oakland County, including Lawrence’s home in Southfield.

Lawrence grew up in Detroit’s northeast side, on Lumpkin Street. She was raised by her grandparents after her mother died when she was three years old.[1] She attended local schools, graduating from Detroit’s Pershing High School. She then earned her bachelor’s degree in Public Administration from Central Michigan University.[2]

Lawrence had a 30-year career with the United States Postal Service, advancing to work in human resources.[3][4] In the early-1990s, as an active member of the Parent-Teacher Association at her children’s school, she sought and earned a seat on the Southfield Public Schools Board of Education. She served as president, vice president, and secretary of the board.

In 2001, Lawrence defeated longtime incumbent Donald Fracassi for the mayor’s office,[6] becoming the city’s first African-American and first female mayor.[5] She was reelected in 2005 without opposition.[7] As mayor, she was invited by the United States House Committee on Oversight and Reform in 2008 to represent United States mayors in testimony about the mortgage crisis and its effect on American communities.[8] She returned to Washington later that year to lobby Congress for a bridge loan for the American auto industry.[citation needed]

She successfully sought a third term as mayor in 2009, defeating former Councilwoman Sylvia Jordan with nearly 80 percent of the vote.[10] She was reelected to a fourth term unopposed in 2013.[11] 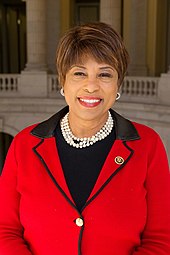 In May 2008, Lawrence announced her candidacy for Oakland County Executive. She was unopposed for the Democratic nomination to unseat the longtime Republican incumbent, L. Brooks Patterson. Patterson won reelection 58%-42%. Lawrence’s challenge to the polarizing Patterson was identified as the strongest challenge he faced in his six elections for County Executive.[12][13]

Lansing Mayor Virg Bernero named Lawrence as his running mate in his bid for governor of Michigan. She was formally nominated as the Democratic candidate for lieutenant governor at the Michigan Democratic Party convention in August 2010. They campaigned around the state promoting a “Main Street Agenda” with emphasis on their shared backgrounds as mayors.[14]

As with the national election results, the 2010 general election in Michigan saw strong turnout and enthusiasm by Republican voters. Political pundits attributed the losses by Democrats, in part, to voter reaction to President Obama and term-limited Democratic Governor Jennifer Granholm. The Democratic gubernatorial ticket lost to Republican nominees Rick Snyder, a businessman, and Brian Calley, a State Representative, 58%-40%. No statewide Democratic candidates were successful in 2010.[15]

In late 2011, Lawrence announced she would be running in the newly redrawn 14th congressional district. The district had previously been the 13th, represented by freshman Democrat Hansen Clarke. It was redrawn to take in a large slice of Oakland County, including Southfield. Clarke’s home in Detroit was drawn into the neighboring 13th district, but he opted to follow most of his constituents into the 14th.

In the Democratic primary, the real contest in this heavily Democratic, black-majority district, Lawrence faced incumbent representatives Clarke and Gary Peters, both of whom lived outside the district,[16] and former State Representative Mary D. Waters. Peters won with 47%, to Clarke’s 35%, Lawrence’s 13%, and Waters’s 3%. Peters went on to win the general election.

In May 2013, Peters announced that he would not be running for reelection in 2014. He instead ran for the U.S. Senate seat being vacated by retiring Democrat Carl Levin. On January 23, 2014, Lawrence announced that would run for the 14th district for the second time.[17]

Lawrence was the first candidate to submit signatures to the state in order to be on the August primary ballot, doing so in March. Other candidates that filed for the Democratic nomination were former Congressman Hansen Clarke of Detroit, State Representative Rudy Hobbs of Southfield and teacher Burgess D. Foster of Detroit.

During the course of the campaign’s contribution reporting, Hobbs raised a total of $607,806, Lawrence $383,649 and Clarke $173,124; Burgess reported no contributions to the Federal Election Commission, indicating that he raised or spent less than $5,000. Michigan Congressman Sander Levin’s Political Action Committee, GOALPAC, also spent hundreds of thousands of dollars to help elect Hobbs, who was previously employed on Levin’s congressional staff.[18]

Lawrence won the Democratic Party nomination on August 5, 2014, with 36% of the vote to Hobbs’s 32%, Clarke’s 31% and Foster’s 1%. She took the most votes in Oakland County, carrying Southfield, Pontiac and Oak Park, as well as Royal Oak Township. Although it was expected that Clarke would convincingly win the portion of Detroit within the district, where he lives and had previously held public office, Lawrence was competitive in the city and won more votes than all other candidates from voters who cast their ballot on Election Day in Detroit.[19]

As the Democratic nominee for Congress, she faced Republican nominee Christina Conyers of Detroit in the November general election. But Conyers withdrew from the race and Christina Barr of Pontiac was chosen as the Republican nominee.[20] The district has a history of voting heavily for Democratic candidates. Also facing off against Lawrence in the November election was Libertarian Party nominee Leonard Schwartz of Oak Park and Green Party nominee Stephen Boyle of Detroit.[21] Lawrence won with 78% of the vote, Barr took 20%, Schwartz 1% and Boyle 1%.

Lawrence is married to McArthur Lawrence. They were high school sweethearts, having met outside the Midway Market corner store where he worked on Detroit’s east side. They bought their first home on Detroit’s northwest side. They have two children and a granddaughter. Professionally, Lawrence worked for the federal government for 30 years in the United States Postal Service. She started as a letter carrier and later worked in human resources management; she retired in 2008. Lawrence’s husband is a United Auto Workers retiree from Ford Motor Company.[28]

Learn more about legislation sponsored and co-sponsored by Congresswoman Lawrence.