Executive, legislative, and judicial governing bodies of the US state of Michigan 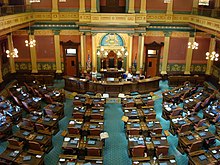 The House Chamber of the Michigan State Capitol in Lansing

The State officers compensation commission, consisting of seven governor appointed members, exists to set salaries for the governor and other elected officials, unless a two-thirds majority in both legislative chambers turned it down.[5]

The independent redistricting commission draws up legislative and Congressional districts after each census. The 13 non-office holding members consisting of five independent members, four self-declared Democrats and four self-declared Republicans, would be selected randomly by the Secretary of State from submitted applications.[6]

A Commission on legislative apportionment was written into the 1963 state constitution. However, the same state constitution provided for land weighting factors for state senatorial districts. Such weighting factors were found unconstitutional by the United States Supreme Court in Reynolds v Sims (1964) for violating the Equal Protection Clause of the United States Constitution.[7] Because land weighting factors were interdependent and not severable from the commission on legislative apportionment, the commission was also invalidated by the Supreme Court’s decision in Reynolds v Sims (1964). This commission was transferred to the Department of State under the Executive Organization Act OF 1965.[8] The state legislature has apportioned districts after census until 2020 as the November 6, 2018 general election proposal 2 created a constitutional independent redistricting commission.[6]

The Grand Tower in Lansing

The two other elected constitutional executives of the state are the Secretary of State and Attorney General. Both are elected separately for four-year terms concurrently with the governor/lieutenant governor slate. The elected officeholders are second and third in the line of succession respectively and may act as governor during disabilities or absences from the state. The Attorney General is the state’s chief law enforcement officer, executive agencies legal counsel and leads the Department of the Attorney General. The Secretary of State and its department handles automobile-related licensing, elections and record holding.[1]

Type 1 agencies are under the administration of the agency but operate independently of the principal department in carrying out its function and in most cases created by a type 1 transfer.[12] Regulations are published in the (MR) and codified in the (MAC or AC).[13][14][15]

The state board of Education is a statewide elected board that head the Michigan Department of Education which oversees all education except that of the state universities.[1]

Michigan’s state universities are immune from control by the legislature, many aspects of the executive branch, and cities in which they are located; but they are not immune from the authority of the courts. Some degree of political control is exercised as the legislature approves appropriations for the schools. Furthermore, the governor appoints the board of control of most state universities with the advice and consent of the state Senate. Only the board members of the University of Michigan, Michigan State University, and Wayne State University are chosen in general elections. 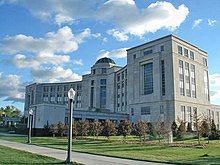 The Michigan Hall of Justice in Lansing 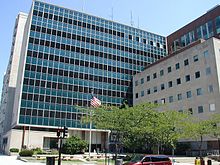 Michigan is largely divided in the same way as many other U.S. states, but is distinct in its usage of charter townships. Michigan ranks 13th among the 50 states in terms of the number of local governmental entities.

Michigan has home rule for counties, meaning there is flexibility for the organization of county government and number of elected officials.[17]

Some common elected officials include: